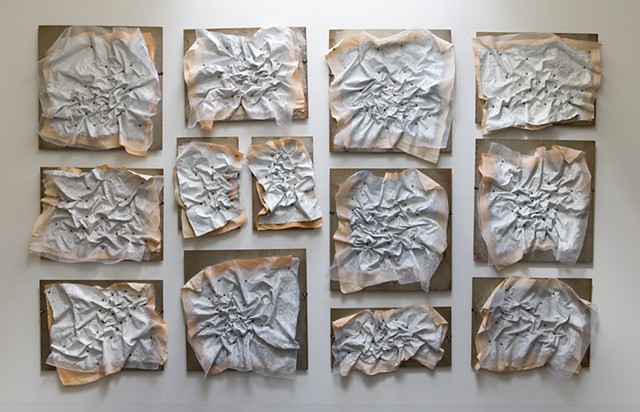 This is what I meant to say
silks, acrylic, fabric dye, magnets, rusted sheet metal
5.5' x 9'
< previous next >

A commentary on the work of Robin Green An essay by Krista Schoening with an introduction from Scott Lawrimore Nothing. Everything—Beginning to Unfold the Double Sensations of Robin Green –Scott Lawrimore, Director, Jacob Lawrence Gallery &#8203; Why only one song, one speech, one text at a time? –Luce Irigaray

I am honored to be writing an introduction to this new body of work by Seattle artist Robin Green. I will also try to provide a brief prolegomenon for the enclosed commentary on the work by the ever-incisive Krista Schoening.

Introducing Green is easy—she is a consummate artist producing dangerously precarious works that demand your whole body’s attention (like all fully-considered art does). Throughout the seven years I have been privy to the various wrinkles of her practice—I first became aware of it when I selected a painting for a juried show at a local art center in 2009—I have been impressed with her seriousness of purpose, work ethic, inquisitiveness, and ability to fearlessly discard the old for the new (while always allowing each to fold onto the other). The unfolding of her practice—changes to it as outlined by Schoening—has revealed warps and wefts—years of laying out threads of thought in one direction before coming back in the other with a different approaches, new techniques or in completely new media. It is commendable to see in her current body—“This is what I meant to say”—the threads coming together and the strength of weave becoming apparent.

The prolegomenon is a little harder—in the interest of word count, it has to remain as plicature. If Green gets to claim, “This is what I meant to say,” and we affirm that Schoening means what she writes, I have to admit that I have left a few “meant to say” wrinkles in my title and selected quote above for future critics, writers and art historians to uncrease. I woul hope that your bodies sense that Green’s unique pictorial space and “tactile sense of vision” might warrant further study via Merleau-Ponty’s phenomenology, especially his theories of the “chiasm” and the “double sensation.” And given Green’s exquisite folds and potentially fraught material choices, one might find Irigaray’s writings a potent way to approach the work beyond its flawless formal qualities. Green’s title for this exhibition also reminds me of this from Irigaray: “…if ‘she’ says something, it is not, it is already no longer, identical with what she means. What she says is never identical with anything […] if you ask [women] insistently what they are thinking about, they can only reply: Nothing. Everything.”

If you ask me insistently what I am thinking about when scrutinizing Green’s work, I can only reply: “Everything. Everything.”

Congratulations and thank you for everything, Robin. A commentary on the work of Robin Green by Krista Schoening

Looking out the window of an airplane, one observes human attempts at squaring off the earth's surface. Straight lines, the divisions of property ownership -- markers of a social organization with an aspiration toward neatness -- are interrupted by geology. Rivers break the neat shapes of state lines, rock outcroppings refuse to conform to linear constraints, and trees interrupt fence lines. Robin Green delights in making work that also gestures toward geometry but then defies it, producing a distortion that is more compelling (and more descriptive of reality) than perfect symmetry ever could be. It is not that Green wants to see order dissolved into chaos, but rather that she thrives in the space between the organized and the wild. Her work shows no interest in mastery, but rather demonstrates her commitment to process and open-ended questioning.

In “This is what I meant to say,” painted silks are fixed with magnets in dynamic attitudes across the faces of metal plates, forming a modified grid. The fabric bunches and creeps, resisting the geometry and related stability of the plate beneath. Metal gives a sense of stable structure, while the silks lend dynamism. Inspired in part by Robert Ryman’s white paintings, the work relates more broadly to minimalist ideas of formal exploration and subtle variation within repetition. Green’s work takes a modernist concept of order as a starting point, but it moves beyond this tendency, in the direction of entropy. The painted fabric of this piece seems like a canvas that has slid off its supports, resisting the rectangle, moving away. Green’s work makes visible the tension between a human desire for order and the complexity of reality. She uses forms and objects associated with orderliness -- the grid or objects from her kitchen for example -- and distorts them. Hers is a vision of the world that allows for, and even celebrates, the intractability of reality and the latent dynamism of things.

Robin Green is a researcher. The methodical nature of her visual experiments owes as much to her previous work with plant reproduction and evolution as it does to her artistic influences. The investigative spirit embodied within her activities is a central part of her character. Having spent years seeing the world through the lens of empiricism and reason, Green developed an expansive view. She worked within the ordering tendencies of empiricism, but loved that which escaped from the net of science. Her work also displays an interest in contrasts. Green often works in the places where divergent qualities confront each other: hard meets soft, rigid meets flowing, flat meets folded. Presenting herself with these oppositions, she explores their possibilities through her practice.

Her latest work grew from previous work, which took the form of still life drawings, made in a small space. In these earlier drawings, she sought a sense of imbalance -- or of balance that is just about to tip. At some point, she started drawing with her still life objects themselves. Pans from her kitchen and pieces of fabric resulted in intimate pieces, sculptural yet made with a painterly intention. Folding fabric reminded her of making brush strokes, and as she manipulated the fabric she felt liberated by the abstract qualities of cloth. Indeed, it is as though she has extended the agency and expressiveness traditionally attributed to the painterly mark to the canvas itself. In this piece, the paint works in the service of its fabric support, not the other way around. In addition, each kind of fabric that Green works with has a liveliness to it, and a particular sort of formal attitude. Specific fabrics respond to her and resist her in their own unique ways, moving from one tactile space to another, standing up against gravity but also draping under its influence. The organza in this piece has a delicacy, weightlessness (in contrast to the weight of the metal plates) and a particular sort of translucency. Green explores the possibilities of her materials, and plays them against gravity, seeing what they can do. The folded, wrinkled cloth breaks up the linearity of the metal, introducing a more humane line.

Green’s work participates in a fascination with draping and folding that has a long history, from ancient art through the obsessive drapery studies of Leonardo, the folded metal works of John Chamberlain, the mid-twentieth century works of Sam Gilliam (to name but a few high points), and into the contemporary. “This is what I meant to say” plays into the conversation with the work of many other contemporary artists who question the nature of a painting as a strictly 2-dimensional flat surface, either inside or outside a frame. The list is long and geographically wide, and includes Joy Curtis in Brooklyn, Jean Alexander Frater in Chicago, Jane Hugentober in Los Angeles, and Julie Alexander and Ben Gannon in Seattle. Each of these artists answers similar questions in very different ways. But like them, Robin Green subverts our expectations of what a painting should be.